Posted on 19 November 2022 by Larry Russwurm

Myself and Stephen Huss used to write songs and jam. He was also left handed. But he refused to conform in a right handed world and had himself a left handed guitar.

I regret that I never brought up my fire breathing dragon guitar idea to Stephen while he was still alive. With him and a left handed dragon guitar, our guitar flames could face each other. Maybe we’d even bring back glam rock. We could have had on stage guitar playing battles that were reflected in our flames and guitar posturing. 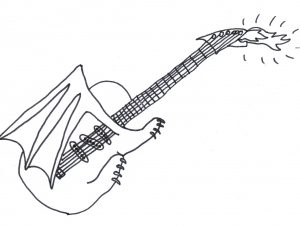 Anyhow, I think I could have gotten at least a laugh out of Stephen, thinking about this.

The internet is riddled with articles saying that left handed keyboards are an abomination. That keyboards don’t favour right or left hands – you have to use both anyhow.

Poppycock! I’ve seen people play the piano before and play some myself. Almost always the lead is done with your right hand and the more simple bass lines are done by your left hand. It is obvious that songs, as written, favour the right handed player on the normal keyboard.

I think that some right handed players want things to stay the way they are so they can play any keyboard they see. I’m a guitarist. I resigned myself to not being able to play Stephen’s guitar. It’s not hard. After all it was his guitar. I shouldn’t be playing it without permission anyhow.

I would also like to see left handed keytars. After all there could be similar fire breathing dragon get ups just as easily as with a guitar. Then I could have a band with 4 fire breathing dragon instruments, 2 guitars, bass and a keytar. Suddenly drums will seem relatively boring. Or flammable.