Posted on 5 March 2022 by Larry Russwurm

I was worried about this last fall as we were getting into the colder seasons. I have all tile floors. She likes lying on them in the summer because they are cool compared to the rest of the place. But in winter that coolness is not desired. The tiles get so cold that I need to wear slippers. For warmth all the poor cat had was the futon and some mats.

I bought her a cheap cat bed years ago and although small, I thought she would use it. After all if any shirt or clothing made it onto the floor she would settle on it. But she never liked the cat bed and never slept on it.

So last fall I bought a bigger cat bed that had cushioning inside it. She didn’t take to it. I picked her up and put her on it but she immediately squirmed and took off. So I lay it there, beside her favourite mat hoping that eventually she would try it.

I think she likes it now but not for its intended purpose. It is now a giant cat pillow. And she has feelings enough for it that just the other day I saw her licking it like it was her baby or best friend (it’s not weird because it is fuzzy like another cat).

So I’ll say this was a semi successful purchase. Obviously she enjoys lying on the mat more. I just now caught her sleeping with it as her pillow so enjoy the photo. 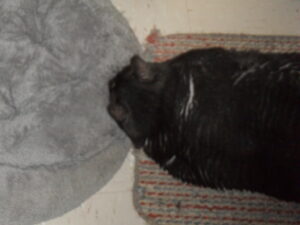